Playing with objects is how babies and toddlers explore and learn about the world around them. In addition to being fun and enjoyable learning through play is essential during early childhood to teach the baby problem solving skills and to practice social interactions. 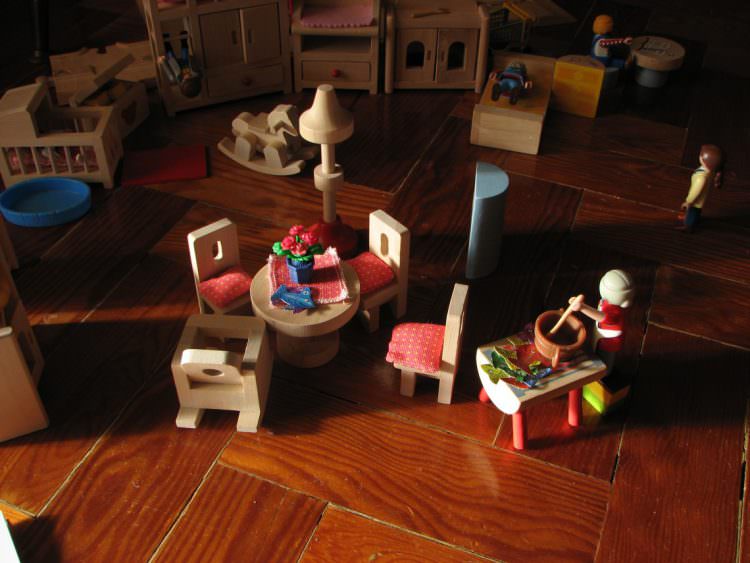 Learning to play is part of your child’s cognitive development and is also highly related to young children’s development of language and social skills during early years. Academic research has proven that the development of play follows a natural progression through a number of developmental milestones. As a parent you can benefit from understanding where your child is on this progression and choose activities, toys and educational games that appropriately stimulate your child’s brain development and help him or her maximize learning – all while having lots of fun, which not to forget is what playing is all about!

From curiosity to pretend play

At first your new born will not really distinguish between toys and other objects, anything and everything is new and interesting and your baby is likely to react to most objects in the same ways, namely staring at, biting, shaking or banging the toy.

What is happening is that your baby is learning about the physical properties of different objects such as soft, hard, noisy, wet, bouncing, and so on.

After a while your baby will learn to distinguish between different objects and start using the object in the most enjoyable way – if it is more fun to shake the toy than chewing it that will become your baby’s preferred way to play with this toy.

At about a year old your toddler will start to play with toys and other objects according to their correct use. Rolling a ball, stacking blocks and calling mommy with her iPhone. 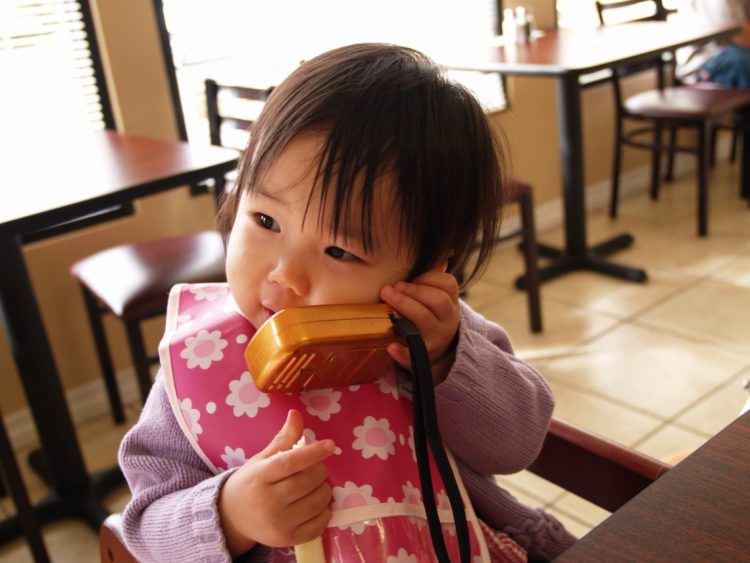 The final stage is the development of what is referred to as Symbolic Play or Pretend Play. At this stage your child will start to mimic and act out familiar activities that he or she has seen you do. Role play and imagination is encouraged as your child serves food for Teddy the Bear and bake Sand Muffins.

It is all Fun and Games!

While the development of play lay an important foundation for serious life skills try not to get too caught up in the gravity of it all. It doesn’t really matter if your baby prefers to shake or mouth the rattle, to bounces or roll the ball or to serve coffee or tea to Teddy. In other words, it is not so important what your baby is playing. Instead try to pay attention to how he or she is playing and interacting with toys, this will give you clues as to where your child is in the development of play progression. Below is a sequential list of development milestones that you may use for detailed reference – have fun! Go wild! Dramatic and imaginative play is encouraged.

When placing a rattle in your baby’s hands he or she will hold on to it and briefly play with the toy, primarily by looking at it and mouthing it.

In addition to mouthing your baby will now start shaking, banging, and waving toys as he or she is playing with them. Your baby may start to develop preference for how to use a toy such as shaking a rattle that makes noise. 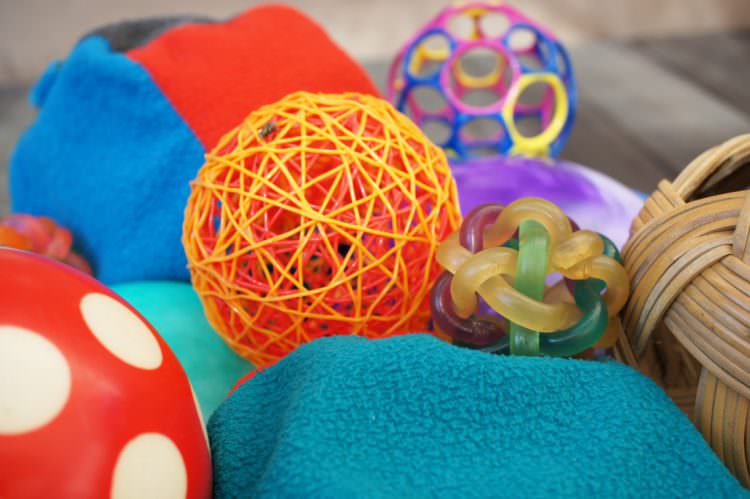 Let your baby explore different easy to grasp toys with various sounds and textures such as smooth, soft, rubbery etc.

Your baby will consistently bang toys and pretty much everything else against nearby surfaces. At this stage your baby is less interested in what kind of object he or she is holding, and will mainly be interested in the new found ability to use the object to hit things and make noise.

Your baby will increasingly show preference for playing with a toy in a certain manner, and will start to add new interactions to his or her repertoire, such as turning, pushing, pulling and poking.

When your baby finds a toy to be particularly interesting he or she may play with it continuously for up to two to three minutes performing the action that is most enjoyable for that particular toy.

Give your baby plenty of new textures and materials to play with, babies love exploring and novelty boost brain development! Everyday objects can be excellent toys at this stage, as long as they are safe and wont easily break.

As your baby develop new fine motor skills he or she will start to enjoy crumpling, tearing, pulling and ripping paper.

Sliding and Rolling a Toy

You baby is expanding his or her play interactions with the ability to slide a toy car or roll a ball over a surface. 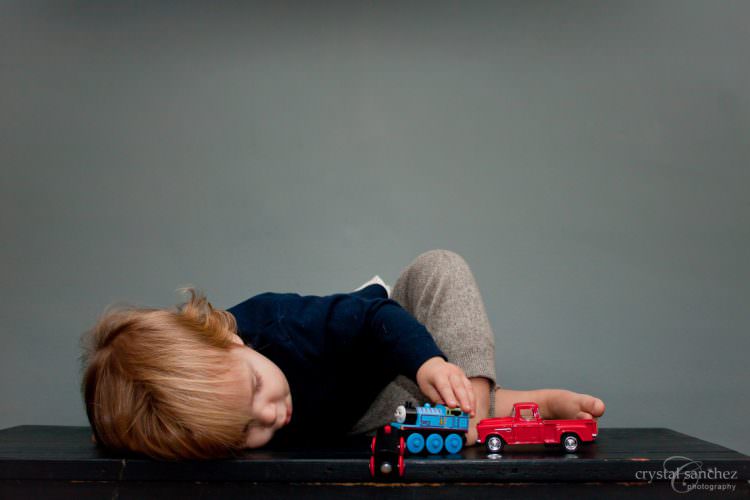 Your baby starts to notice and understand pairings of objects such as spoon and bowl, stick and xylophone, peg and pegboard.

Your baby is now starting to use objects according to their intended purpose such using a brush for grooming his or her own hair, giving Teddy a big hug, and even complex actions such as drinking from a cup and eating with a spoon.

Let your baby play with familiar functional objects such as tableware, sunglasses, washcloth and similar items.

Your toddler is starting to show the first signs of Symbolic Play, imitating adult behavior such as talking on the phone, reading newspaper or doing house work.

Play interactions get more sophisticated as your child uses realistic props and start to combine actions such as pretending to stir food before using a spoon to serve it to Teddy.

Suggested toys are those that support acting out real adult social interactions such as Baby Tea set, Baby Cooking Ware, Dolls and safe to play with items like magazines, tissue paper etc.

Your toddler continues to act out scenes imitating adult behavior, chaining interactions with objects in sequence such as putting a doll into a cart then pushing the cart around.

More and more your toddler will start to use his or her imagination to assign pretend purposes to objects such as using a shoe box as bed for Teddy or pretending a stick is a toothbrush.

5+ Ways to Play with a Laundry Hamper

At this stage your toddler begin to give pretend emotions, ideas and thoughts to actors in his or her play, and display still further sophistication in the interactions and linking different interactions.

Examples of Dramatic Play behavior include reading books to Teddy and soothing him to sleep, changing Teddy’s diaper by performing a series of actions from cleaning to drying, or having a conversation with Teddy on the phone talking on Teddy’s behalf and helping him hold the phone to his ear.

5+ Ways to Play with a Laundry Hamper Kids Chef Hats

He or she is now able to plan the sequence of a play story such as going to work, by first putting on a hat, then getting into a car and saying bye-bye.

Pretend Objects become increasingly more abstract such as using a chair as cooking stove, a drawer as oven and play sand to bake a cake.

Pretend Objects may take on multiple roles such as playing doctor using a Peg to give examine Teddy’s ears, then later using the same peg to give Teddy a Vaccine Shot.

Your toddler starts talking to him or herself while playing saying things such as “I’m going to bake cake” before starting a play about cooking, and also talking to Teddy by giving instructions such as “sit down” when inviting him to eat the cake or saying “no no” when Teddy throws his cake on the floor.

Your toddler's pretend play takes on increasingly imaginary elements such as playing Air Guitar or brushing hair with an imaginary brush.

Play scenes are made up of longer stories with several steps laid out in sequence. 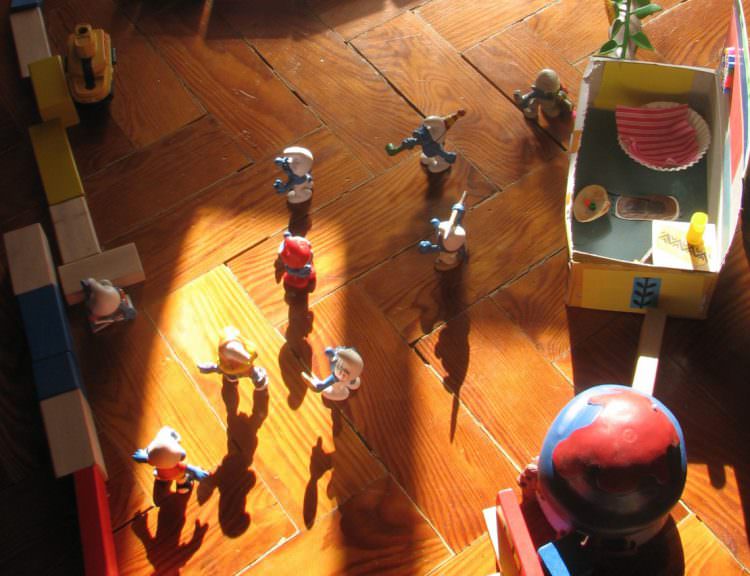 Your toddler starts to assign roles to adults such as saying “I am the doctor, you are the baby”.

Suitable toys include play versions of everyday objects and toys that stimulate creative play such as building blocks and play dough.

5+ Ways to Play with a Laundry Hamper

Do a friend a favor! – Share this great resource with others who could benefit from it

Kids Chef Hats
5+ Ways to Play with a Laundry Hamper A list of ways we can inspire pretend play for our kids with a simple hamper.
DIY Turkey Leg Hat Cute and easy activity, which is perfect for Thanksgiving holiday.

The 5 Principles of Planning Your Child’s Playtime Art for Kids: How Art Plays a Role in Early Childhood Development

Pin it for later